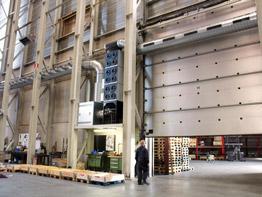 Breman Machinery has three workshops that are 25 metres high, and welding work takes place in two of these shops. There is also another building with a 15-metre ceiling height where welding is also performed. Due to the varying size of the workpieces and the large distance between welds, source extraction was out of the question in this situation.

There was already a welding fume extraction system in the first building, but it was not up to the task. Due to the large quantity of welding wire that was used, the filters lasted no more than two weeks.

In the second building, welding is performed both by hand and by a welding robot. The robot is used for welding large workpieces, which involves large amounts of welding wire. Logically, this results in more welding fumes. Combined with the manual welding at varying locations throughout the building, this produces lots of fine particulate matter that results in a cloud of welding fumes. A solution was sought that would be suitable for both manual welding and robot welding.

In the third building, like the first, the work involves large workpieces and the welding is generally done by hand. The welding fumes rise to between 4 and 6 metres due to the heat, and it is here that the cloud of welding fumes forms. This cloud becomes thicker throughout the day. Then, when the temperature drops, the cloud sinks to the floor again.